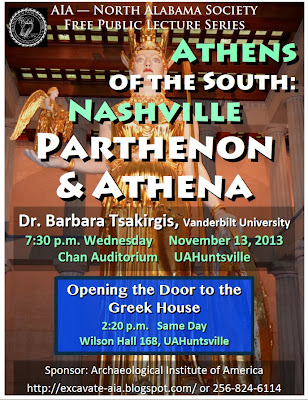 Dr. Barbara Tsakirgis of Vanderbilt University is a classical archaeologist who specializes in the study of ancient Greek houses and households. She received her Ph.D. in Classical Archaeology from Princeton.  She has excavated in Italy, Sicily, and Greece, and has been conducting excavations at the Athenian Agora since 1993. Dr. Tsakirgis will be giving two talks one on Greek archaeology and one on the recreation of the Parthenon in Nashville. Both talks are free and open to the public. Please come and bring a friend!

"Athens of the South:  Nashville Parthenon and Athena"
7:30 PM 13 November
Chan Auditorium UAH Campus
Posted by Unknown at 10:13 AM No comments:

Greetings Members and Friends of the AIA!

Welcome! Here you’ll find updates on our events as well as links to news on cool, current topics in archaeology. Please consider joining the AIA and supporting our local society. As an AIA member affiliated with our local society, you get to vote on what lecture topics we choose each year. A significant portion of your membership gets refunded to our local society to support our activities. You’ll have greater access to all our speakers—more chances to ask questions and hear the inside scoop on new discoveries! Our society receives two FREE lecturers because we maintain a membership of fifty. AIA headquarters pays their airfare and honorarium and our local society provides a venue and hospitality. As a local society we invite an additional four to six speakers and host other events such as our annual archaeology fair and our biannual wine tasting. Your support directly impacts the number of fascinating archaeologists we bring to North Alabama. Thanks again for your support and enthusiasm!

The AIA in Action!

Have you ever wanted to go on an archaeological dig? The AIA publishes the Archaeological Fieldwork Opportunities Bulletin, which has listings for digs from the US to Mongolia to Australia. Not ready to get dirty? The AIA offers behind the scenes tours of archaeological sites all over the world. Being a member of the AIA supports many valuable programs in site conservation as well as training activities such as talks to our troops in Afghanistan and Iraq. We encourage the future of archaeology by providing scholarships to archaeologists in training. Create a future for the past. Join the AIA!